The best starting point for a tour of Cork city's burgeoning street art scene is at the city centre/north end of Barrack Street, just below Elizabeth Fort .

At the junction of Evergreen Street 'The Geisha Girl' on the side of the famous, multi-award winning Japanese eatery, Miyazaki , adorns the gable end of this building. 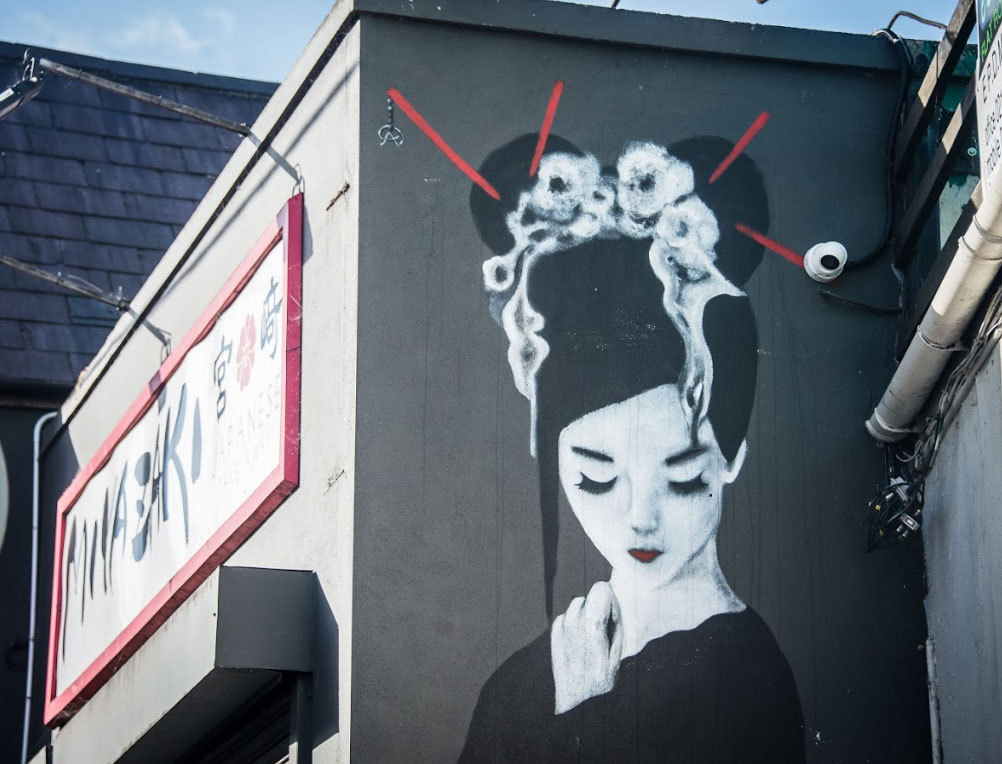 Walk downhill, turn right down Sullivan's Quay and you'll spot the first of many traffic box art pieces opposite, Irish language centre, Gael Taca - this one is an old Irish language proverb (the translation is 'People live in each other's shadows') - cross over the Nano Nagle footbridge to Grand Parade to see one of many traffic box art pieces outside the city library. This one is an homage to Cork rock band The Frank and Walters by MadAboutCork . 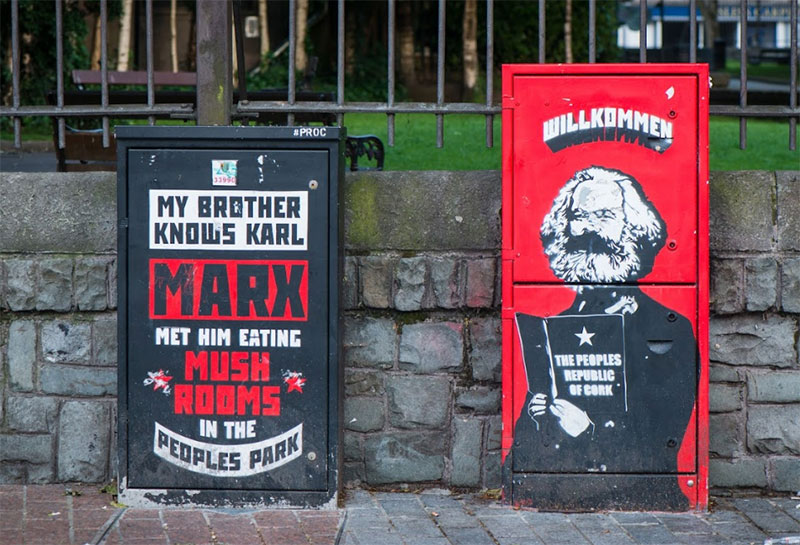 A few metres away outside Bishop Lucey Park you’ll see what seems like a random quote about Karl Marx eating mushrooms, and the other featuring Karl Marx himself welcoming you, and all German speakers, to Cork. These two pieces, by PROC and Garreth Joyce , pay tribute to the ultimate 90’s chart topping song released by Cork band Sultan’s of Ping called “ Where's Me Jumper? ” 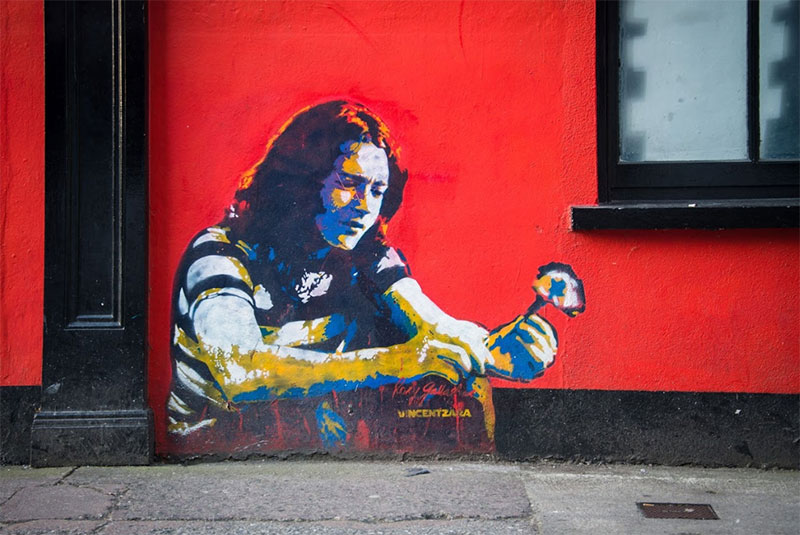 On nearby Tuckey Street, seek out the two red murals wrapping Ziggy’s Bar at the end of the street on the left (opposite The Oval). Another depiction of Rory Gallagher (yes, Cork is slightly obsessed with him) by Vincent Zara, Phil Lynott of Thin Lizzy and his guitarist (Belfast born) Gary Moore. Be sure not to miss the “Keep Calm You’re In Cork Now Like” mural. 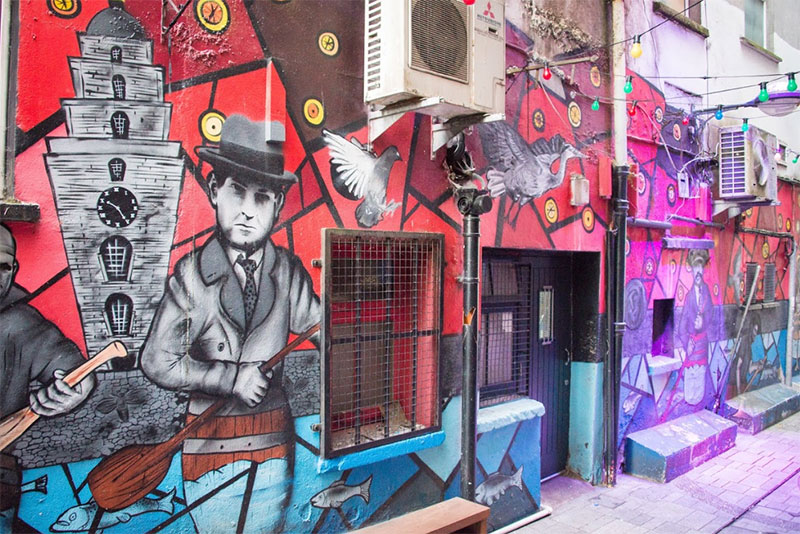 From here, head north along South Main Street, and take a right onto narrow Tobin Street where, at the Grand Parade end, renowned artist Peter Martin has created a huge mural depicting Cork city as it moves from day into night. 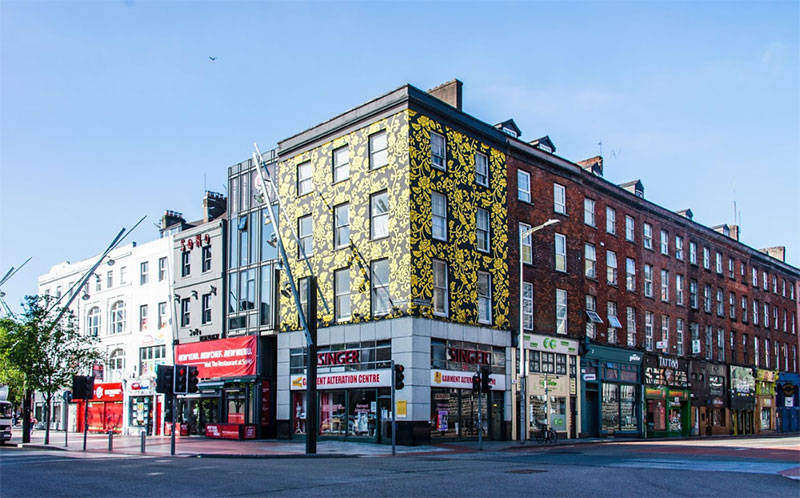 Back on Grand Parade, take a few steps towards the road and look up behind you at the stunning three storey artwork on the building on the corner of Washington Street by Johnny Bugler . 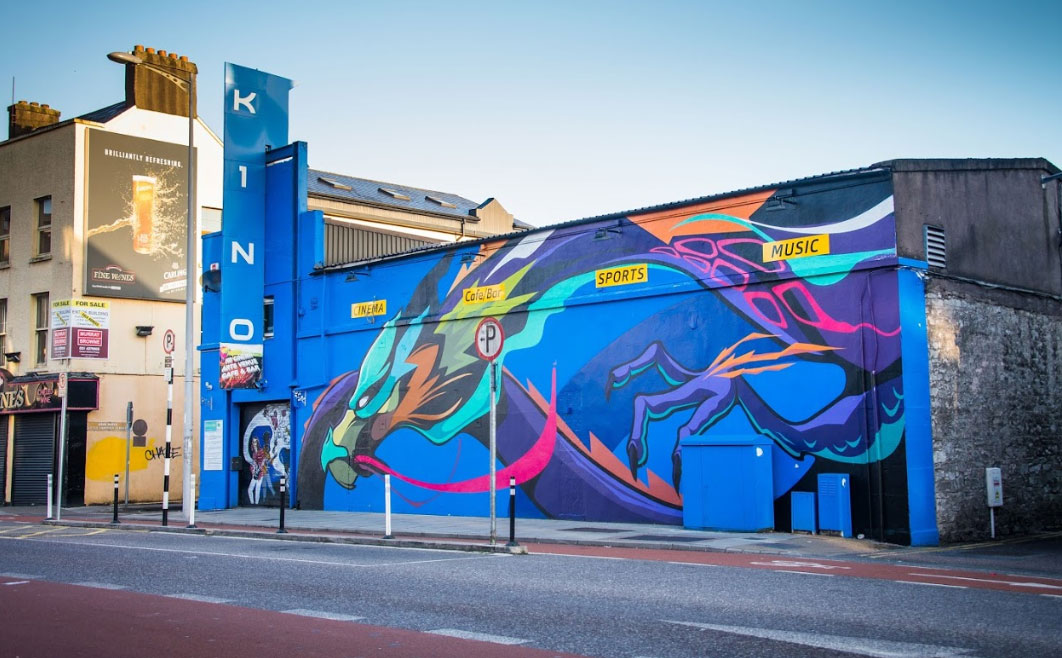 Moving east along Washington Street and then left up North Main Street you’ll pass another Peter Martin masterpiece called “Welcome to Paradise” at the junction of Liberty Street, known historically as ‘Paradise Place’.

Further up North Main Street you’ll find a mural by Tom Doig depicting some of the city’s great poets and nearby Coleman’s Lane is a treasure trove of street art from local artists and schoolchildren. 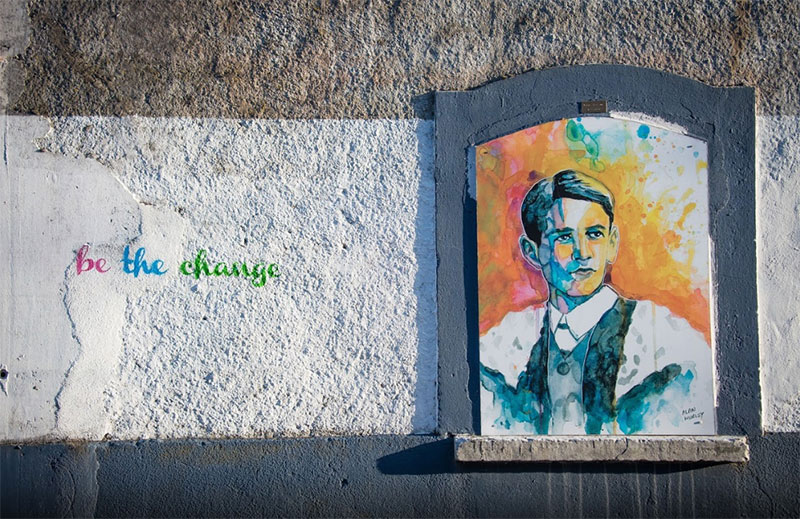 Going east onto Kyle Street will bring you to the Patriots of Irish Freedom mural with with (L-R): Terrence McSwiney, Tomás MacCurtain, Michael Collins and Thomas Kent - painted by Alan Hurley working with ReImagineCork. 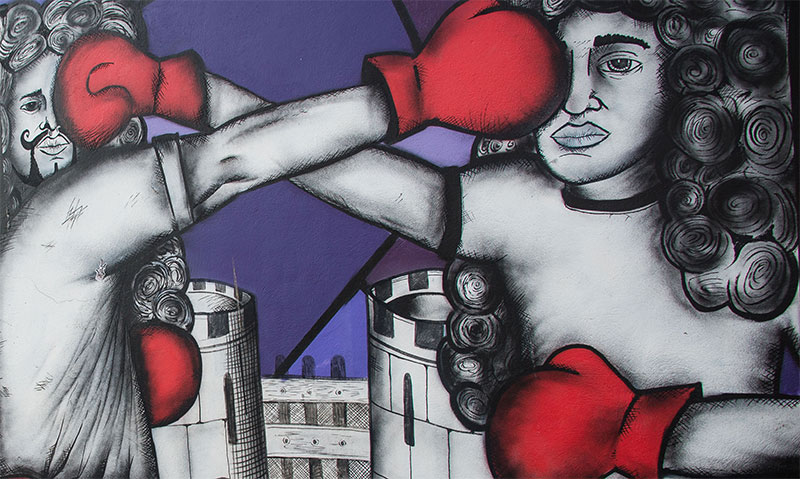 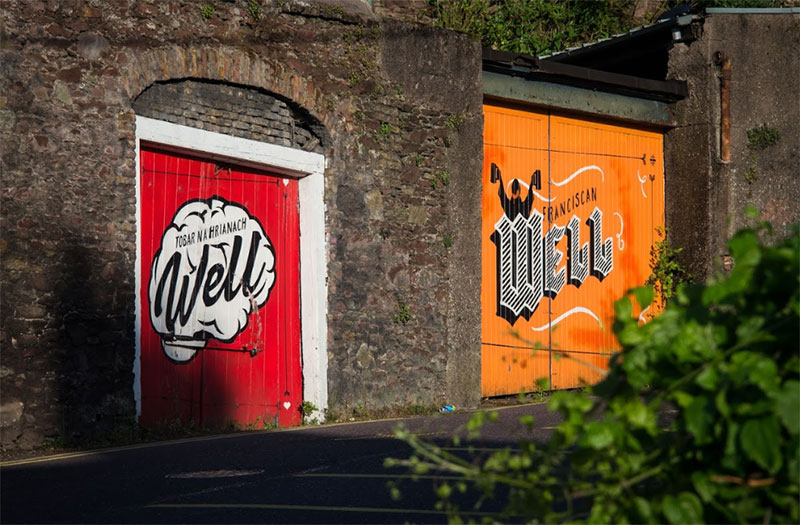 Head back to North Main Street and north towards the river, crossing North Gate Bridge and turning left on to North Mall. At the end of this quay as it turns up to Sunday’s Well you’ll find three beautiful text-based murals painted by Garreth Joyce on the doors of the old Irish Distiller’s premises. 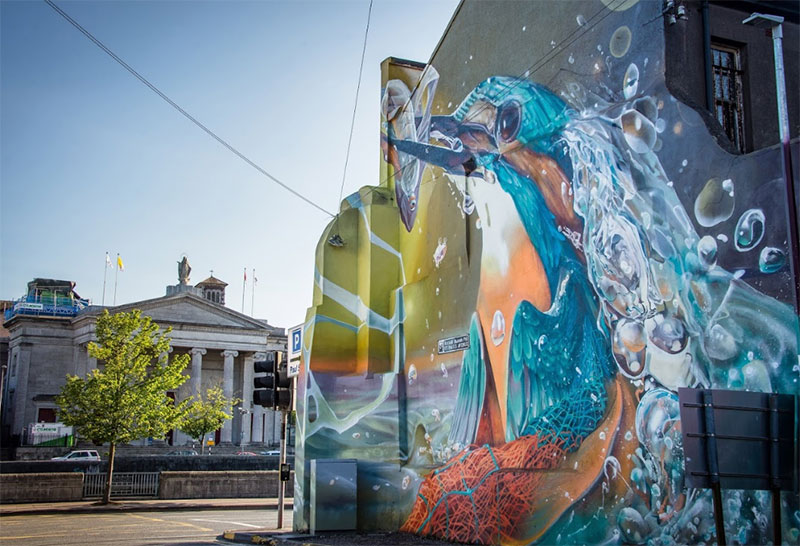 Crossing St. Vincent’s footbridge, and heading east, back towards the city centre you’ll find a huge and stunning, kingfisher mural on Lavitt’s Quay by Curtis Hylton . 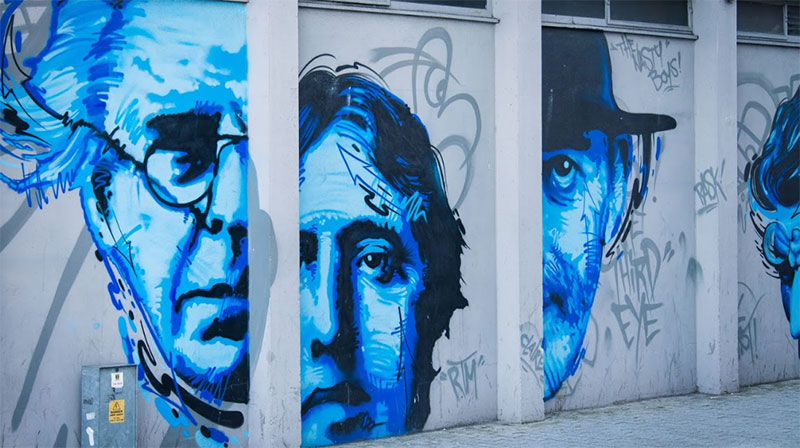 Next walk south away from the river, up Academy Street and to Cork’s main shopping thoroughfare, St Patrick’s Street, seek out a slither of an alleyway, Mutton Lane. This lane way is home to a fantastical mural by Anthony Ruby stretching almost the full length, culminating in one of our most atmospheric and oldest hostelries: Mutton Lane Inn . The mural was commissioned by Cork City Council and was devised and completed by artist Anthony Ruby. 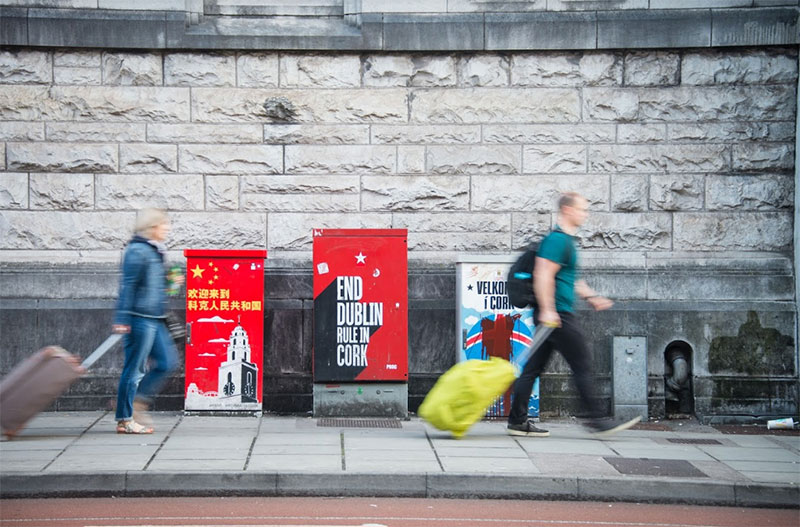 Many depict famous Corkonians and lots have a ‘Welcome To Cork’ theme with languages from Spanish and Icelandic to Japanese and Mandarin Chinese. There are Welsh, American and Scottish pieces scattered around the city too - see if you can find your country's box and take a #purecork selfie!