Ireland has a temperate climate – meaning it’s never too hot and never too cold. The biggest influence on the country’s weather is the Atlantic Ocean to the west – often fierce but more often forgiving it prevents any extremes in Ireland’s temperatures.

Weather dominates conversations in Cork and given its changeable nature you’ll often hear people talk about ‘four seasons in one day’ which means when you’re packing for a day out in Cork be prepared for all eventualities …..you could be reaching for your warm woolly clothes in the morning, wishing you had brought sun cream by lunchtime, searching for a rain jacket in the afternoon and be down to your swimming trunks by early evening!

In summer Cork gets plenty of sunshine with average highs up to 20 degree Celsius and average lows down around 3 degrees in January and February. Cork has had its fair share of heatwaves and highs of up to 25 degrees in recent years and in winter snow is limited to a few days, if any. As with anywhere in Ireland, you should expect rainy days with an average of 73 days of “heavy rain” per year. 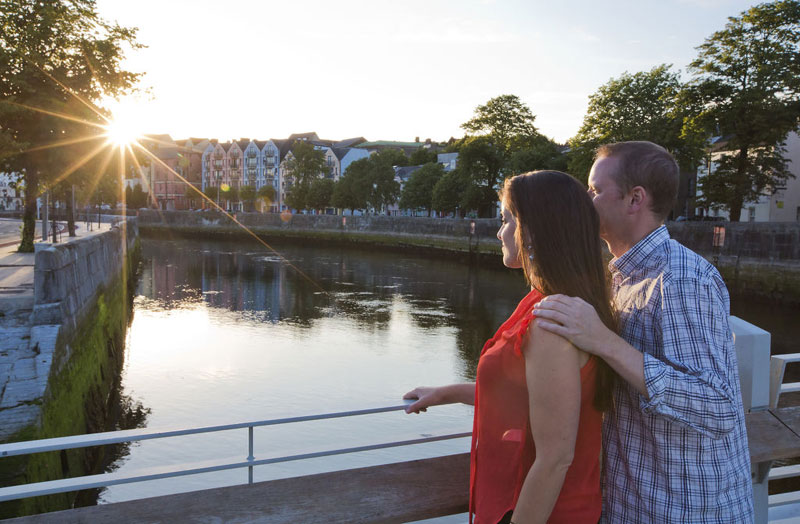 LOOK ON THE BRIGHT SIDE
Given Cork’s latitude, you can expect up to 18 hours of brightness in the height of summer which allows you to tour the countryside and maritime haven from very early until very late at night.

Slow blazing deep orange sunsets to the west can be spectacularly dramatic especially around Cork’s 1000km Atlantic coastline – visitors are often amazed at how bright it can be after 10 pm in June and July.

And whether you’re up early with the kids or coming home late from a big night out you’ll be rewarded with breath-taking 5 am sunrises that creep up from the east.

Oh, and if you’re camping you might need to bring an eye mask!